Music for the film of Alan Schneider and Samuel Beckett titled “Film” (1965)
For flute, clarinet, percussion, piano and string orchestra

Conductor: Miltos Logiadis
Camerata – The Orchestra of Friends of Music

Short note about the film
Film, written by Irish playwright and novelist Samuel Beckett, is one of the greatest American films of the 1960s.
In his penultimate film, which was released posthumously, Buster Keaton gives a marvelous performance as an old man in a tenement apartment, mutilating keepsake photographs and dodging the eyes of his puppy, kitten, parakeet and lone goldfish. In fact, Buster dodges everything in his uninviting place that resembles an eye, including the ornate design at the top of the back of his single piece of furniture, a rocking chair. Buster dodges even his own gaze, covering the wall mirror with a drape.
There is one eye, though, that poor, beleaguered Buster, despite his best efforts, can’t escape: that of the camera. He hides his face from it, too, throughout the film, but the camera dogs him and finally exposes his face to us. This causes Buster to cover his eyes in defeat.
In this film, we ourselves become the camera. It becomes our extension Beckett himself thus explained his protagonist: “He is in search of non-being, in flight from extraneous perception breaking down in the inescapability of self-perception. 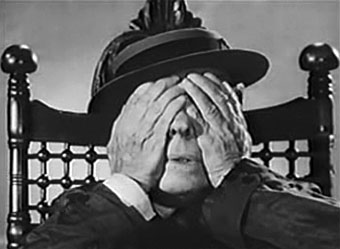 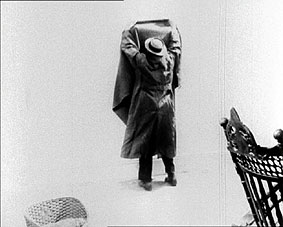 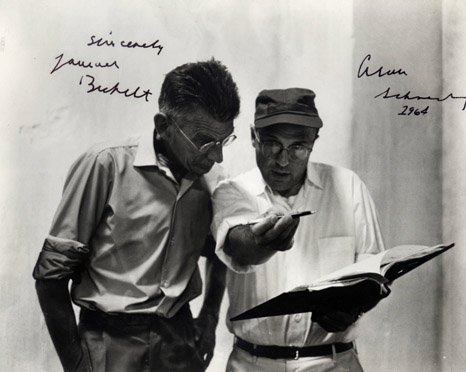