AD LUMINA (2002)
for flute solo
Ad Lumina (=to the light) is a virtuosic and rather demanding solo piece although there is no need for any extreme contemporary performing techniques. The concept of the piece lies on the sharp contrasts between fast and slow passages, extreme high and low registers, and piano-forte dynamics. The piece begins with the introduction of the melodic elements which run through the piece in several variations and transformations.
The piece was dedicated to Yvonna Glinka, who also did the premiere performance in Louisiana on February 14, 20032 and also the first recording of the piece.
Dur: 7.30’ 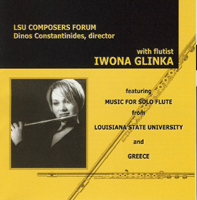